Killers – one of the four Bartle Player Types – force themselves on others. They could choose to have nice conversation for those warm, cosy, inner feelings, but that’s not really substantial. Instead, they often attack other players, with the intention of killing their character.

Many of us have probably been in this situation before. You are fighting the good fight, but your opponent finally manages to take you down and defeat you. But… it doesn’t stop there…

After you are defeated, your motionless body will be sat on, or your killer starts to perform other aerobic movements, including (but not limited to) dancing and jumping. Purely to rub it in.

It’s a lot easier to design features for a game – ones that are well-received – if you know how your players prefer to approach the experience.

This deep dive is a sequal to Bartle Player Types: Introduction and Overview.

We turn our eyes to the Killers; those who prefer to perform actions in the game that in real life could mean imprisonment.

1. What do Killers want from a game?

No longer chained to morality ⛓️

Killers want to dominate. It is not just about winning… It’s about winning so big that the other is left completely destroyed. Crying opponents? Wonderful!

Fun is creating chaos and frustrating other players. The greater the suffering, the greater the Killer’s joy at having caused it.

The purpose of playing is to see the world burn and to be in a position of power so great, that other players do not stand a chance. If cheating is a way to achieve this superiority… Killers will do whatever it takes to get to that point.

They value knowledge based on its potential application in their end goal. Achievements comes from other people’s loss. Other game aspects are merely a means to an end.

They enjoy the notorious reputation they have earned; feared by others. Killers are proud of their status and much practised, refined fighting skills; though they are often spat on by other players. 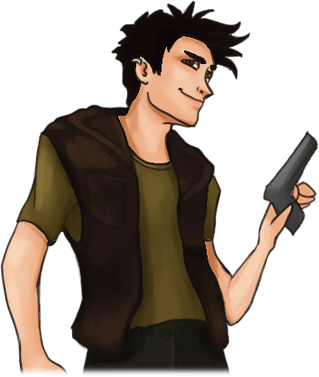 Killers want to make it difficult for others; action from them to other players 🔪👥

As the quadrant shows, the Killers fall under Acting and Players. Obviously, there is no interaction. The victims (for that is what they are) don’t like engaging with Killers. 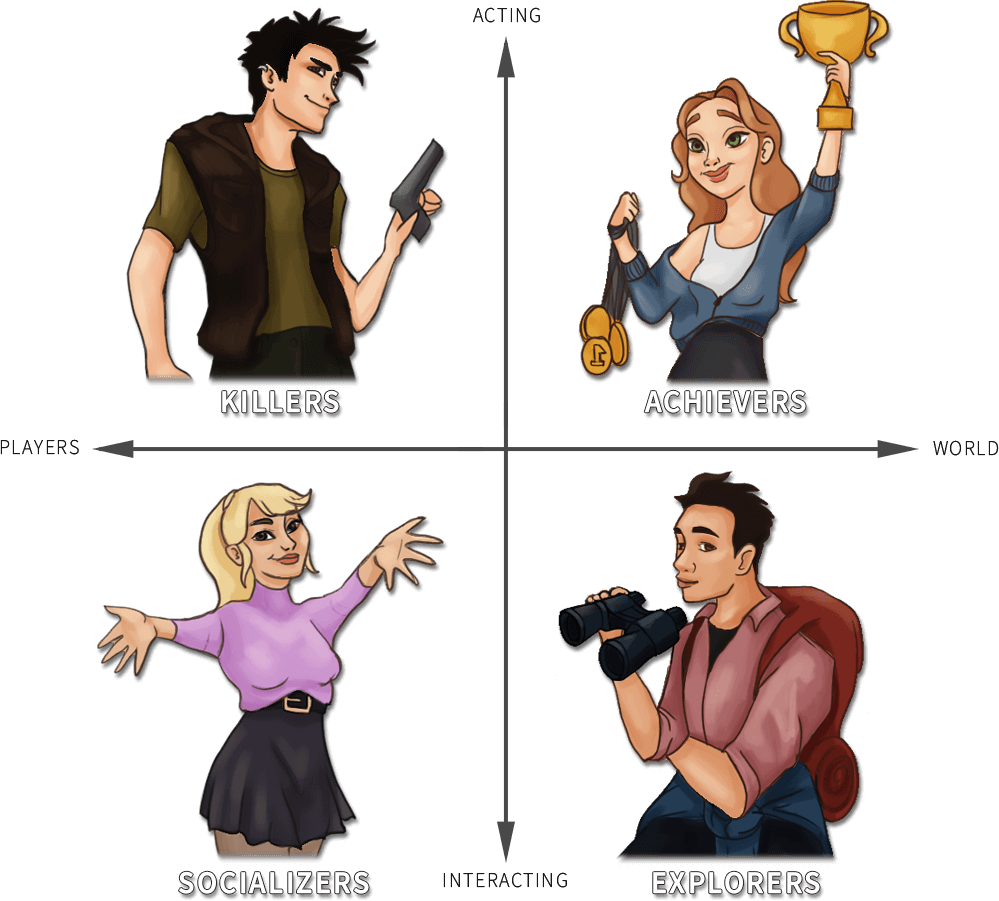 So, in effect, you are developing more mechanics for Killers by focusing on a world where anything can happen and players are not protected with immunity shields. Killers like to cause suffering to players who are just minding their own business; exploring, getting acheivements, talking.

Making the world smaller increases the chance of players running into each other.

Killers enjoy communication tools and effects that make other people’s blood boil. A possible deepening of combat mechanics invite Killers to master their persona, with the ultimate goal of…?

2. How do Killers view other players?

I will make sure you understand the meaning of playing… 😈

Last but not least, it allows us to understand the worldview of a specific Player Type even better with insights into how different Player Types view each other.

⚠️ The following paragraphs are a brief summary of Bartle’s research and are based on stereotype Killers. They should not be taken as automatically true for any individual player who shows common characteristics with the Killers archetype.

Killers try to not run into each other too much in the open world. They want to dominate and claim superiority. Being killed by other Killers would damage their reputation.

This also makes it difficult for novice and wannabe Killers to pursue their beloved career path. Many are put off by the more experienced Killers who also attack the juniors.

Ah, Achievers…The natural prey, as Mother Nature intended. Achievers are good fighters, but not as good as Killers, who have specialised in the craft.

This gives a ‘thrill of the hunt’.

An Achiever may be able to escape the fight a few times, but eventually they will succumb. The fact that Achievers also don’t like to be attacked makes the experience all the more enjoyable for the Killers.

Explorers are (besides other Killers) the only Player Type they regularly leave alone. There are two reasons for this.

Explorers can be great fighters who use many unpredictable and strange tactics. The shame that comes from losing to an Explorer is something that should be avoided at all costs.

Other Explorers care little if they are killed. Sometimes they just let the attacks happen and don’t defend themselves. This is the ultimate cruelty to Killers.

Socializers are great to harass. This is the Player Type where Killers best cultivate their infamous reputation.

They are often pushovers who feel terribly hurt when they are attacked, especially if it leads to the loss of their persona. This is ultimate enjoyment.

The Bartle Player Types are sometimes misunderstood and used wrong. 😳 It is probably not even meant for your project.. 🥺 That doesn’t mean you couldn’t use the model. 🙃

The Bartle Player Types are sometimes misunderstood and used wrong. 😳 It is probably not even meant for your project.. 🥺 That doesn’t mean you couldn’t use the model. 🙃

This model is a populair guideline for thinking strategically about games and gamification. 🤔