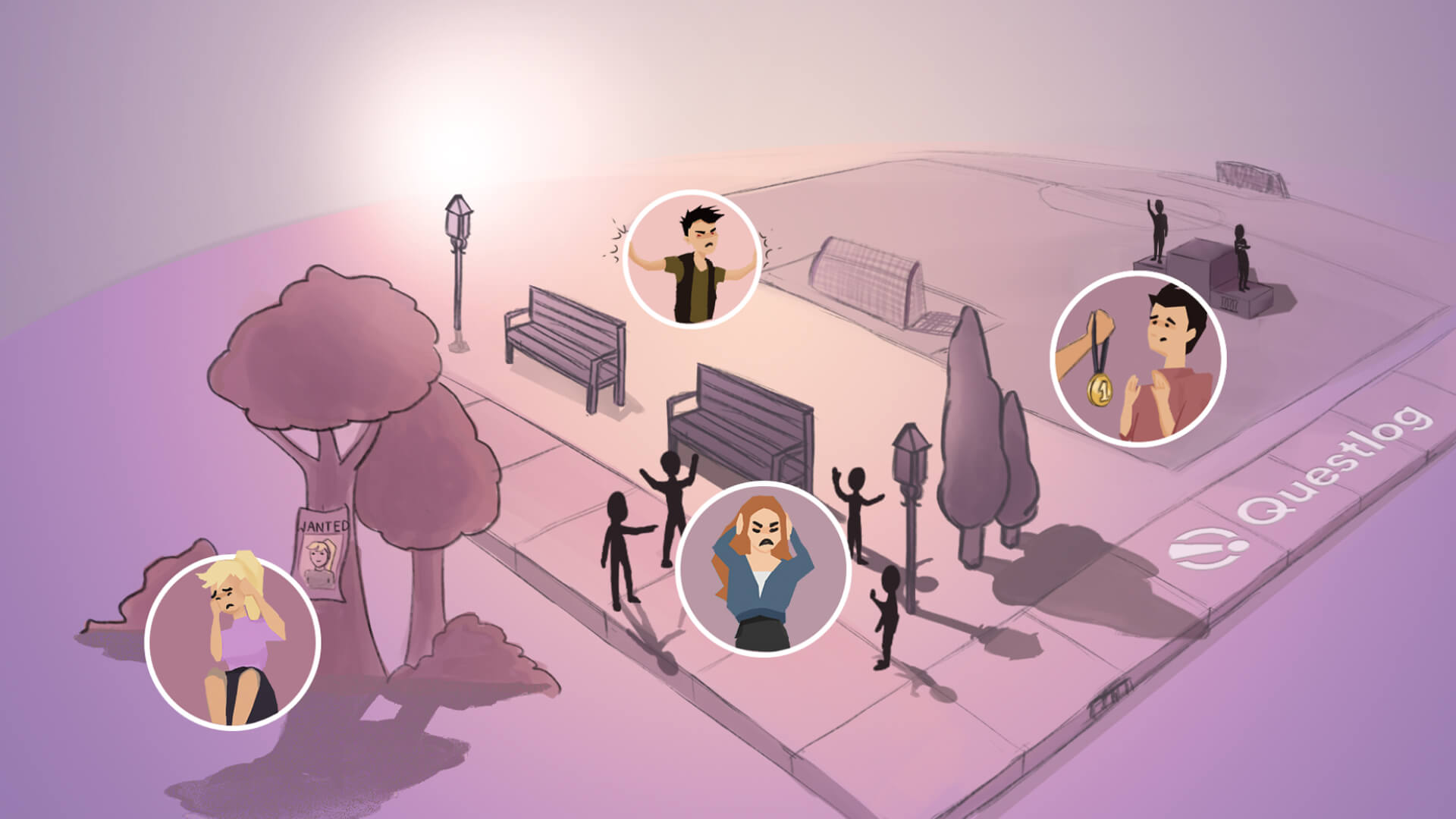 The Bartle Player Types are at times misunderstood, and misused in practice. It is probably not even intended for your project at all. That doesn’t mean you can’t use the model.

Take another good look at the image above. As you can see (after recognising the characters from my earlier posts), there is a lot going wrong here. Do you see the errors?

The Achiever is stuck between players who want to chat. The Explorer gets all the medals. The Killer can’t find any victims. And the Socializer is being hunted.

The Bartle Player Types model is perhaps the best known and most used model in the gaming and gamification industry. Anyone who has immersed themselves even a little bit in the theory has almost certainly come across this model from 1996.

In this blog post, I build on my previously written Bartle Player Types: Introduction and Overview.

People sometimes read about the Player Types and then apply it to their project. Often wrongly. Below we discuss the 7 most common mistakes in using the Bartle Player Types.

1. Forgetting or not knowing the origin

It is not made for your application, but… 🔨

In my previously mentioned blog, I discussed the origin of the types.

Know that the model originated from – and was created for – MUDs (Multi-User Dungeons). These were text-only games and the precursors to MMOs, such as World of Warcraft and Guild Wars.

According to Bartle, the theory also works on today’s graphical MMOs, but that’s about it.

It is not made to apply to single-player games, gamification, serious games, or games that have no virtual world.

And yet, the model is often used for these applications as well.

That is not necessarily wrong!

The model is very simple. That makes it easy to use.

It also seems to be reasonably applicable to many gamification systems and single-player games, although perhaps not all types will be covered.

Richard Bartle describes the Player Types as a hammer. It works great on nails, but not so well on screws. But then again, if there is no screwdriver, a hammer still works better than your own fist.

It is important to keep thinking critically.

The Bartle Player Types can help you step outside your own world view. After all, people are built very differently. Not everyone wants the same thing from a game or gamification system.

But do not forget the origins. Don’t stare blindly at the four types. What do they mean for your application?

2. Interpreting from your own perspective

Both designers and players make this mistake 🎭

The aim of the Player Types was to make designers aware of the different motivations of players.

As mentioned before: people are wired very different. Not everyone wants the same thing.

At the same time, it is extremely difficult to put yourself in another person’s shoes to see what moves, motivates, and enthuses them.

For example, Explorer types are sometimes rewarded with extra points for exploring a new area or discovering an easter egg. That is not what an Explorer is look for at all. Those are rewards for Achievers.

But as an Achiever designer, it is logical to give meaning to the ‘exploring elements’ in this way.

On top of that, people find it hard to assess themselves.

They think they are a certain type, based on a recent experience (availability heuristics), or because they have an emotional connection or distaste with a name (killer, achiever, socializer, explorer), or because they did a quick Bartle test, etc.

It is very open to misinterpretation.

Also, players will often move back and forth between all four types depending on their current mood or play style, despite probably having one of the four styles as a primary.

If you then get feedback from an Achiever who thinks he is a Killer, it can be very misleading and ultimately pull the real Killers away from the game.

3. Consciously applying it beyond its limits

This is a mistake I make myself.

Questlog is not a game, but gamification. Questlog is definitely not a MUD or MMO.

Some people are aware of the fact that the model is not made for their application, and yet they draw the model beyond its boundaries and limits.

That can sometimes be useful.

People play MMOs for different reasons, so the same would probably be true of gamification. Perhaps several elements of this model are similar.

In such a case, we must remember that we are using a hammer to kock a screw into a board, not a screwdriver.

We are all guilty of this.

We all read only the headings of an article, only look at the model, and only scan the list. We don’t read the text around it.

This scanning works particularly well to get a first impression. To see if something is worth more time and attention.

But if you decide to use a model, it is important to really delve into it.

Read what is written. Don’t just pick up the type names from a summary. Don’t get stuck in just a collection of those nice Player Types models on Google. Go to the source. Many blogs don’t give the full – and sometimes even wrong – information.

If you understand why a model is designed and what it tells you, you can make the right choices in strategy and implementation.

It can be very expensive if you only find this out after months of work. Someone who likes Player vs. Player features is not necessarily a Killer.

5. Tunnel vision and seeing it as magic formula

The model alone is not enough for the whole 🧩

Some have a tunnel vision on the Player Types model. They see it as a magic formula. It doesn’t matter why it works, just that it works.

Game elements that have no direct connection to the types are left out. Players from all four quadrants may need good storytelling, scarcity, unpredictability, meaning, and opportunities for personal expression and ownership.

However, this is not reflected in the model. The Bartle Player Types focuses on the differences.

Nor do people look at possible side branches within their project. Perhaps other types were possible? They lead the players into the types. A self-fulfilling design.

6. Using it because it exists

Don’t be an Achiever collecting all models, but choose the right one 🙃

Instead of using a model just because it exists, it is better to first know what you want to achieve and how the model can help you do so.

Should you use this model at all? Is it the right one?

There are quite a few game and gamification models available today. Some of them are very specific to a particular niche.

A wrong approach would be: “Ah, what could I use this for?”

7. Seeing the types as an identity

The Bartle Player Types are an anology; a resemblance, not an identity.

As described earlier, playing styles can vary and it is not always easy to identify players correctly. It is better to see the Player Types as areas of interest.

Pigeonholing people can blind you to alternative cues and comes close to the tunnel vision.

💀 Killers force themselves on others. They often attack other players, with the intention of killing their character. 🔪

💀 Killers force themselves on others. They often attack other players, with the intention of killing their character. 🔪

This model is a populair guideline for thinking strategically about games and gamification. 🤔